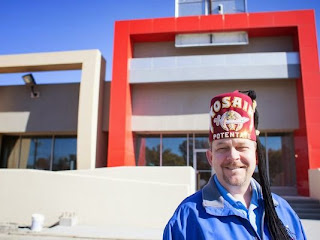 A public dedication event Saturday for the Kosair Shriners' new $5 million headquarters in a remodeled car dealership in Buechel signals a new chapter in the group's 130-year history in Louisville and also introduces a soon-to-be restaurant open to the public.

A grand ballroom with a cushioned dance floor in the former car service area and meeting and dining rooms also will be available for public rental in the building, 4120 Bardstown Road.  The Shriners had hoped to be in the new, 41,000-square-foot building by now, but unanticipated permitting and construction code requirements delayed the renovation process by eight to 10 weeks, after some work began in February, Shawn Warren, the group's potentate and CEO, said.

Now the organization hopes to move in this February, when the restaurant in the former car showroom will open to the public for breakfast and lunch. Pillars and a portico will be added in front at the main entrance, and a large parking area will be landscaped.

"When we're done, it will be a showplace," Warren said.  The dedication event was scheduled on the same day as the organization's annual Potentate Ball, which it had hoped to hold at the new site. Instead the ball will be held again at the organization's current multi-level Kosair Shrine Temple, 812 S. Second St., which was purchased for $3.85 million in March of last year by adjacent Spalding University.

Saturday's event will include a symbolic and traditional "cornerstone laying" ceremony overseen by the Masons' Grand Lodge, which has headquarters at the Masonic Homes of Kentucky campus on Frankfort Avenue. The building used to have a bowling alley, before being expanded over the years.
The Shriners are still using the downtown building until their new building is ready, and it has a public dining room there, too, that has long attracted business people and others.

Two months after Spalding bought the downtown building, the Shriners bought the former Swope Auto Group site for $2.26 million. Proceeds from the sale of the building to Spalding are helping pay for the overall $5 million cost of the headquarters project — which includes about $3 million for remodeling — along with proceeds from the sale of Shriner property on River Road in the 1990s.
The Kosair Circus offices, which are now in a separate building near the temple downtown, will also move to the new site, and a Louisville ballroom dance group that uses the downtown ballroom is expected to move, too, Warren said. The Kosair Circus is held annually in February at Broadbent Arena.

The Shriners have about 30 "special interest" groups for members, including ones for motorcycle riders, its band and former and current pilots — and each will have a separate meeting room at the new headquarters. Retiree groups from L & N and the Air National Guard that currently use meeting areas in the downtown building and others also will be able to use the new site, and the Shriners hope to attract new user groups, Warren said.

Many of the Shriners' 2,400 members lived between I-65 and the Gene Snyder Freeway along the Taylorsville Road corridor, and the group wanted a centrally located, one- or two-story building that would be more accessible to older members. The current site downtown has four main levels and about 13 sub-levels in all, connected by staircases, Warren said.

The organization's original building, the Kosair Shrine Mosque and Hotel, 224 E. Broadway near Floyd Street, still survives as an office building owned by Norton Properties next to Walgreens.
The exterior still has copper-colored panels with Arabic-style inscriptions from when the group occupied it for a few years in the 1920s, before tough economic times forced the sale of the building, Warren said.

The group then met at other sites, including the old Henry Clay Hotel and the Scottish Rite Temple at Brook and Gray streets, before buying th current building from the musicians' union.

Reporter Martha Elson can be reached at


Link to Courier-Journal Story
Posted by Fratline Admin at 5:50 AM No comments:

Register by Email to Receive Updates and Special Offers! 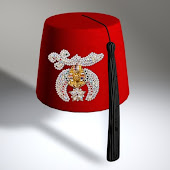